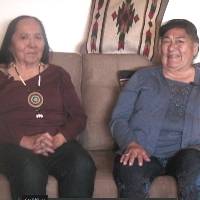 Delaine Spark Spilsbury and Laura Star Rainey are both Great Basin Shoshone from Ely, Nevada, part of the Western Shoshone.  They began this oral history by speaking of their experiences going to grammar and high school as well as growing up during the Depression.  They both spoke about the challenges of making a career in engineering while you’re a woman.  They go one to speak about the traditions such as hunting and fishing that were practiced by Western Shoshone people.  They also spoke about how their parents’ traditions were diffused by Stewart Indian School.  The ended their stories by telling the audience about their sons up-bringing and speaking to the youth. (GBC VHC Description, 08/02/2017)