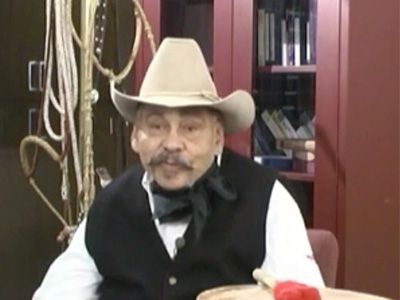 Ellison Jackson, Shoshoni, explains about the early lifestyles in Owyhee, Nevada, how he did not know his English name, and gives a tutorial on the hand game. He describes how he worked on a ranch and grew up as a cowboy, explains some of his Shoshoni Indian culture and customs, and the legend about the wolf and the coyote. Ellison also sings a song with his drum and mentions how it tells a story about Mother Nature and animals.

Ellison Jackson was the son of Robert Jackson and Lena Jackson. He is best known by his Native name Bombo. Bombo tells us of his childhood growing up in a tent near the Presbyterian Church in Owyhee, Nevada. He also tells us of his experience at the Swayne School. Bombo also tells us about his buckaroo and cowboy days riding horses, and what his grandfather James Cavanaugh told him to expect. He also tell us a Shoshone tale about Coyote, the Shoshone, and the Paiute. Also tells us about another tale about the Sun, Brush Rabbit, and Cottontail. (GBC VHC Description, 08/03/2017)