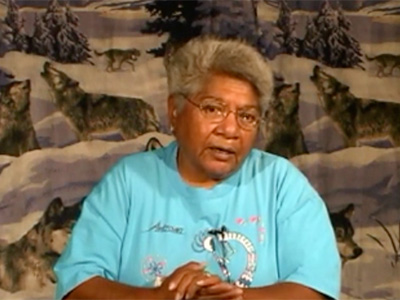 Evelyn Temoke-Roché, a native of the Western Shoshoni, discusses her customs, the origin of the Temoke name, and the details of her family history. Evelyn’s grandfather, Muchach, and father, Frank, were both chiefs of the Te-moak, of which she shares their history, treaties they were involved in, and how they came to be. She also describes of the traditional plants and natural remedies that the Shoshoni used for herbal medicine. Evelyn gives details on what type of role and power the medicine men, and women, played in the Shoshoni society and culture.

Evelyn begins by telling us the history of the Temoak people of the Wattadicca (Rice-eaters).  She speaks of the 1863 Ruby Valley Treaty and the implications and events surrounding it including the land claims.  Evelyn also describes the traditional Shoshone territory, the traditional medicinal plants, and the beginning of the Reservation period.  She speaks of her grandfather Muchach Temoke, who became chief of the Western Shoshone.  Evelyn also reflects upon her up-bringing including her travels, including her involvement in the American Indian Movement (AIM).  She also recants on Shoshone medicine people. (GBC VHC Description, 08/03/2017)